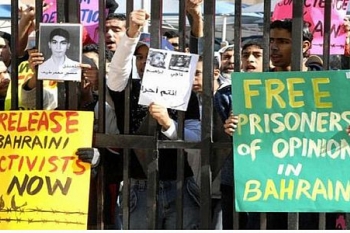 08 May 2013 The Bahrain Center for Human Rights is seriously concerned for the health and well being of imprisoned activists, human rights leaders and political leaders who are currently being denied access to adequate healthcare and denied their right to receive visits from family members, their lawyers, and denied consular services. Members of the 'Bahrain 13' and Zainab Al-Khawaja are being denied these rights because of their refusal to wear a prison uniform. Members of the Bahrain 13 are currently being denied access to sanitary items, such as shampoo, soap, toothpaste, toothbrush, and laundry detergent. In Bahrain, prisoners are required to buy these essential items in a prison store. All members of the Bahrain 13 are currently denied access to this store because they refuse to wear the prison uniform. They are therefore unable to maintain appropriate hygiene. A doctor working closely with the BCHR stated that "denying the prisoners from buying sanitary and hygienic items will promote the spreading of skin diseases such as scabies, body lice and other contagious diseases and risks an epidemic within in the jail". The BCHR reiterates that healthcare and hygiene are non-negotiable human rights, and under no conditions should they be withheld from prisoners as punishment. The United Nations standard minimum rules for the treatment of prisoners clearly states that "prisoners shall be required to keep their persons clean, and to this end they shall be provided with water and with such toilet articles as are necessary for health and cleanliness." 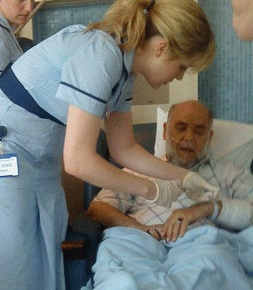 Hasan Mushima in the hospital
Hasan Mushima is a member of the Bahrain 13 and a former cancer patient who is in need of follow-up checks on his health and medical attention. Because of his refusal to wear the prison uniform, the authorities are denying him his right to attend these appointments, and placing his life at risk. For more information on his case, see: http://www.virtualbahrain.net/en/node/5614

Al-Singaise taking part in a protest
Abduljalil Al-Singace is a member of the Bahrain 13 and suffers from 'tachycardia', according to the lawyer Mohamed Al-Tajer, which can cause irregularities in the heartbeats. He recently lost consciousness, but was not treated outside the prison, despite his weak condition. The United Nations standard minimum rules for the treatment of prisoners states that "sick prisoners who require specialist treatment shall be transferred to specialized institutions or to civil hospitals. Where hospital facilities are provided in an institution, their equipment, furnishings and pharmaceutical supplies shall be proper for the medical care and treatment of sick prisoners, and there shall be a staff of suitable trained officers." 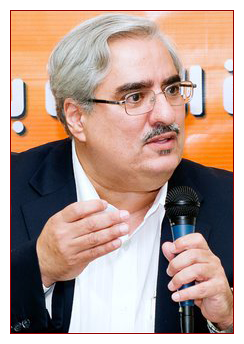 Ebrahim Sharif
Ebrahim Sharif is also a member of the Bahrain 13 and is currently suffering from pain in his shoulder as a result of the torture he received from the authorities. His family has requested a full medical examination to identify cause behind this pain, but Sharif is not allowed to have any medical exams outside the prison without wearing the uniform. Background information on the Bahrain 13 case can be found here: http://virtualbahrain.hopto.org/en/node/5272

Zainab Al-Khawaja at a protest
Zainab Al-Khawaja is an independent activist who has been in prison since February 27th, 2013, for “participating in an unauthorized demonstration and entering a restricted zone”, and has not been allowed outside since May 3rd. Prison authorities are also preventing her from visiting with her family members, including her three year-old daughter. Ms. Al-Khawaja has faced charges in more than 10 politically motivated cases against her, at least four of which are still active. A verdict is expected in relation to two of these cases tomorrow, on May 9th, and also on May 15th. (More details: virtualbahrain.net/en/node/5666). The BCHR fears that Zainab will be sentenced to further imprisonment.
The Bahrain Center for Human Rights demands that: 1. all prisoners be granted full access to healthcare, family visits, lawyer visits, and consular services in accordance with the Universal Declaration of Human Rights. 2. the politically motivated charges against the above mentioned individuals should be immediately dismissed, and they should be released from prison.

The Price of Freedom of Speech in Bahrain 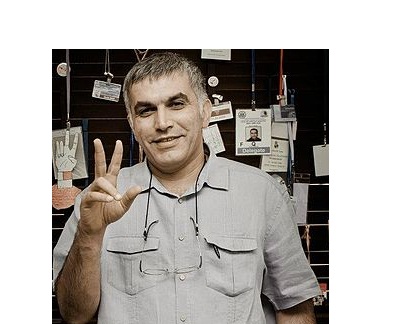 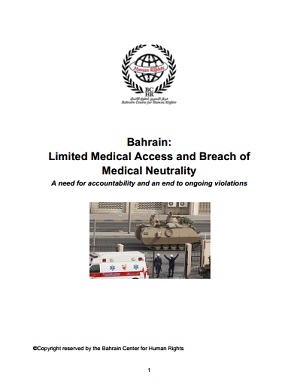 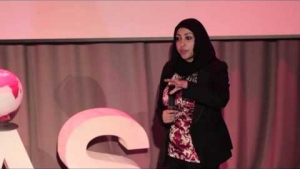 Enter your email address to receive the latest updates from BCHR.